To simplify the process all financing mechanisms are channeled through local Partner Banks, who receive continued support from the Programme’s Project Consultants.

Credit terms and conditions are set by the local Partner Banks and the ultimate decision whether or not to extend financing to an applicant company is made by the Partner Banks only. EBRD, EU and the Project Consultants have no influence on this decision.

The Project Consultant is responsible for the technical assessment of investment projects and, together with the Verification Consultant, for setting and checking grant amounts. The Partner Banks will pay Grant incentives to the owners of successfully completed and verified projects. However, the Partner Banks have no influence on the level of grants to be paid out. 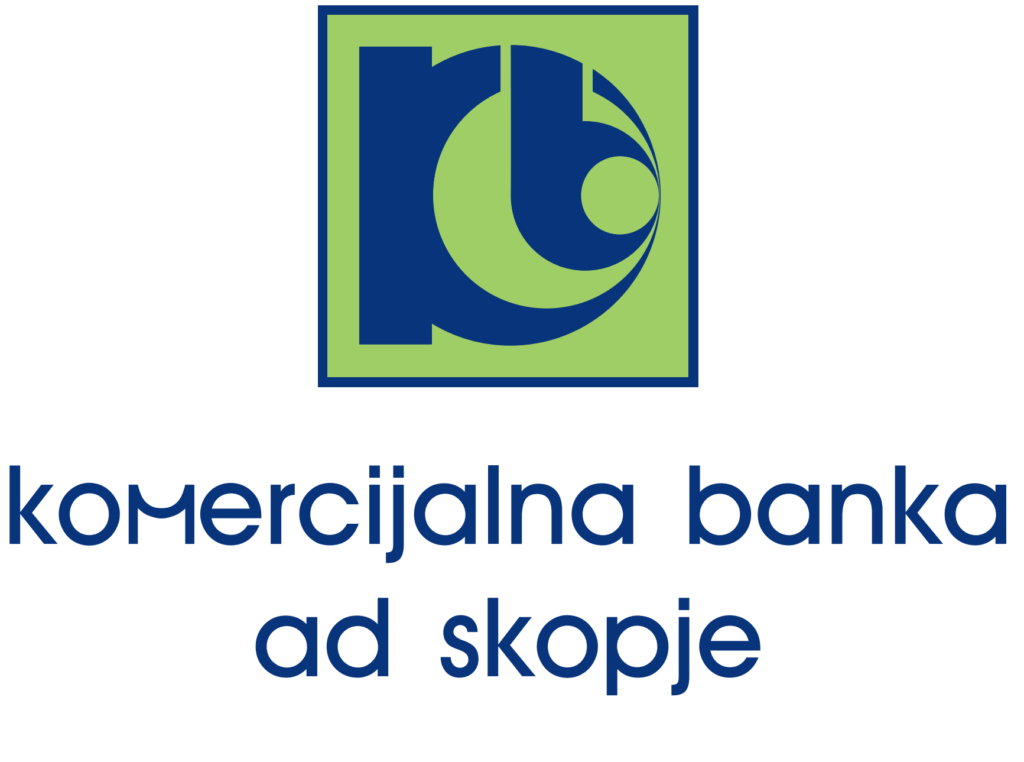 Komercijalna Banka AD Skopje is one of the leading banks in the Republic of North Macedonia with market share of 22.7% in the total assets, 26.6% in the total customer deposits, 16.4% in the total net loans to customers and 20.4% in the total capital and reserves. In its long existence, the Bank has built an image of a bank with tradition, trust, reliability, innovation and a strong national and international reputation, guided by its basic mission to be a highly profitable institution which is recognized as the leading independent, privately-owned Macedonian bank offering a universal range of services and with a strong international reputation professionally supported by a strongly market-oriented, well trained management and staff of the highest expertise and integrity.  As of December 31, 2018, the Bank has the largest customer base, including 941,474 clients, individual persons and 34,583 clients, legal entities. Through the widespread network of 11 city branches, 54 branches, 158 ATMs and 4,568 POS terminals, which is constantly increasing, the Bank is always close to service to the final users and in the function of providing fast and efficient international services for its clients, the Bank has established correspondent relations with 607 banks from 72 countries and maintains nostro and vostro accounts with 28 banks.   Komercijalna Banka AD Skopje holds 49% of the equity capital of KB Prvo penzisko drustvo AD Skopje founded together with the Prva pokojninska druzba from Ljubljana, in accordance with the reform of the pension system accomplished in the Republic of Macedonia in 2005., as well as a qualified share of 64,29% in Investment Fund Management Company – KB Publikum Invest AD Skopje that has been established together with a group of investors from Slovenia and Italy in 2008 and it manages the open investment fund KB Publikum Balansiran since 2009, with the KB Publikum Paricen and KB Publikum Obvrznici investment funds since 2011 and KB Publikum MBI 10 since 2017. Komercijalna Banka is one of the most successful banks in the Republic of North Macedonia, with strong domestic and international reputation, being confirmed by the leading position on the Macedonian banking market in certain segments of operations, as well as by the numerous international and national bank awards. For more information visit www.kb.com.mk

Sparkasse Bank Makedonija – tradition, reliability and trust! Tradition, reliability and trust are synonymous with Sparkasse Bank Makedonija, durable values that are part of our and your everyday life, part of our common success. They give us the right to believe in a common future and in the realization of efficient and modern banking. Proof of this statement is the confidence expressed through the achieved results in the past years and the continuous development of the Bank. The bank ended the past 2017 with assets of over 305.5 million euros and nearly 58,600 active clients receiving top banking services in 26 most modern branches throughout Macedonia. Our mother bank Staermerkische Sparkasse, through the long-standing tradition of nearly two centuries, is a synonym for stability and continuity in the work with a built-in brand Sparkasse with red S. The red sign S means:

Steiermaerkische Sparkasse Group, with total assets of 15 billion euros, 233 branches and regional centers, about 2,751 employees and about 702,414 clients in Styria and Southeast Europe (according to data from the end of 2017) is the largest regional bank in the south of Austria. The Group has a long-term and sustainable investment strategy in the region, which makes it a trusted partner and investor behind Sparkasse Bank Makedonija. As a member of Erste and Steiermaerkische Sparkasse Group, Sparkasse Bank Makedonija is part of the strongest group of banks focused on working with individuals and small and medium-sized enterprises in Europe. www.sparkasse.mk

ProCredit Bank is a development-oriented commercial bank. We offer excellent customer service to small and medium enterprises and to private individuals who have the capacity to save and who prefer to do their banking through electronic channels. In our operations, we adhere to a number of core principles: We value transparency in our communication with our customers, we do not promote consumer lending, we strive to minimise our ecological footprint, and we provide services which are based both on an understanding of each client’s situation and on sound financial analysis. We focus on small and medium-sized enterprises, as we are convinced that these businesses create jobs and make a vital contribution to the economies in which they operate. By offering simple and accessible deposit facilities and online banking services and by investing in financial education, we aim to promote a culture of saving and financial responsibility among business clients as well as private individuals. Our shareholders expect a sustainable return on investment over the long term, rather than being focused on short-term profit maximisation. We invest extensively in the training and development of our staff in order to create an open and efficient working atmosphere and to provide friendly and competent service for our clients. https://pcb.mk/

The leasing company SPARKASSE LEASING DOO Skopje was established in March 2009, owned by Steiermärkische Bank und Sparkassen AG from Graz with 51% and Sparkasse Bank Makedonija AD Skopje with 49%. SPARKASSE LEASING Group has been working successfully for years in Austria, Slovakia, the Czech Republic, Hungary, Romania, Slovenia, Croatia, Montenegro, Serbia, Bosnia and Herzegovina, and operates in the Republic of North Macedonia as an independent legal entity. SPARKASSE LEASING DOO Skopje as a leasing company is an authority for financing through leasing in North Macedonia and we are trusted by state institutions, large, small and medium enterprises, as well as individuals. We offer solutions to each client according to their needs and strive for equal cooperation and the creation of a long-term partnership. Stable growth and development, as well as the expertise and professionalism of our employees are the deciding factor for success. The range of products and models is tailored to the customers, so we offer each client a different solution, tailored to their specific needs. The business professionalism and kindness of our employees is based on the transparent working conditions that enable open and honest communication.

NLB Banka AD Skopje is one of the leading banking institutions in the Republic of North Macedonia with a constant growth trend and continuous positive results from its establishment until today. It was founded in 1985 and since 1993 has been operating as a commercial bank that performs all banking services for clients from the country and abroad.

The bank has been a member of the NLB Group since 2000 and is one of the largest and most successful member banks of the Group outside Slovenia. NLB Banka Skopje is a kind of economic ambassador of Slovenia and at the same time one of the most successful Slovenian investments in our country. For the entire period since NLB’s entry as a strategic partner for almost 20 years, the Bank has been working with positive results and providing a high return on investment.

In parallel with the significant financial position in the Group, NLB Banka Skopje is the second most systemically important bank in Macedonia, i.e. the most systematically integrated bank – member in the local economy, which actively participates in the daily smooth functioning of the real and civil sector.

The Bank has a well-developed client approach, rich and structured product offer, developed sales network, a wide selection of available channels for quick access to the Bank. One of the basic strategic commitments of the Bank is to support and finance the development of small and medium-sized enterprises as holders of economic development in the Republic of North Macedonia, and itself is a significant participant in all financial developments and a promoter of Macedonian business on the international markets. The Bank pays particular attention to enriching and adjusting the supply of products and services to the needs of different market segments and facilitating access to them by investing in a modern business network comprised of 52 modern branch offices organized as small banks. Simultaneously, NLB Banka is the leader in the digitalization of the market, with continuous investment in the electronic services of the Bank and introduction of innovations in the offer, all in the direction of improving the experience of the clients and maximizing their satisfaction.

© 2018-2022 European Bank for Reconstruction and Development. All rights reserved